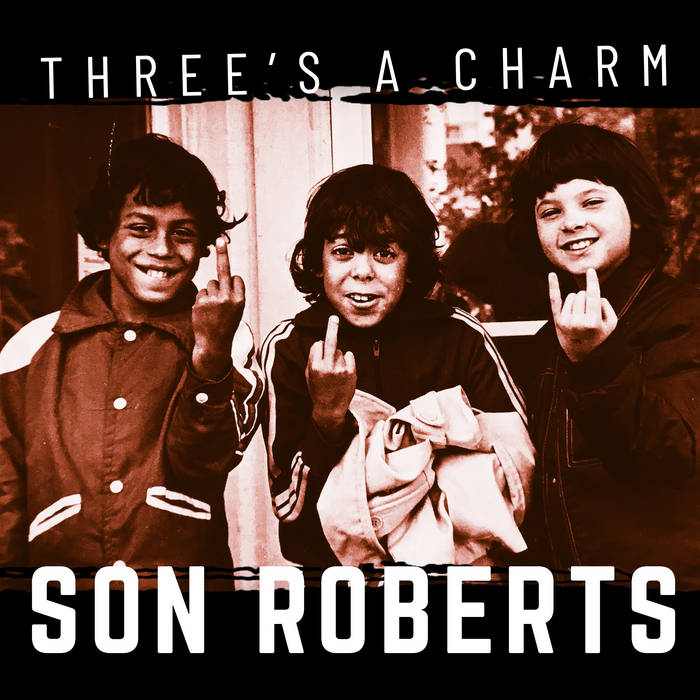 SON ROBERTS Third Album is a Different Kind of Blues.
This is music for the here and now.

"Three’s a Charm" is an eclectic, unpredictable and daring album of original tunes. Inspired by real life, this third album continues Son’s mission to honour the Blues by creating original music relevant to this time and place.
The album features the 2019 Cobalt 2nd place winner “Down on Vaughan Road.”
Other stand out songs include the acapella lead off “Morningstar,” written to memorialize the passing of Sharon Morningstar Keenan.
Her father once worked with Son in a print shop on Dupont St. at the time of Sharon’s disappearance in 1983.
The boisterous “Bad Hard Town" was written in light of the Sammy Yatin murder and Rob Ford’s poisonous tenure as Toronto Mayor. “Cold Black Chair” rocks and reels, “Not Nuff Night” is a funky rom-com, and “See Me Livin’” is a haunting take on being lost and found in life. The mix and mastery continue with the LIVE in-studio recording of “Keep That Joy Alive,” and the country infused autobiography of "Tied up in a Song,” the subject of cinematic video to be released shortly.
Son enlisted a masterful crew to create the album, including Brett MacMillan, aka Buff Justice as producer, engineer and lead guitar player, daughters Kate Roberts & Gail Roberts (background vocals), Sarah Thawer (drums), Alan Zimaitis (keys), Sergio Faluotico (drums and percussion), Jesse Whiteley (keys), Gary Kendall (bass), Jerome Tucker (bass), Omar Tunnoch (bass), Ed Roth (accordion), Ralph MacDonald (guitar and mandolin), Canadian country music journeyman Tim Burns (bass) … among others.
The album was recorded on a dead-end street in Toronto amid the raucous revelry of the car repair shops that operated beside the studio – an industrial unit once used as an indoor earth worm farm. It’s affectionately known as the Meatlocker.
ABOUT SON ROBERTS
Not related to the awesome indie-pop-rocker Sam Roberts, they do share Montreal as a hometown. And while Son doesn’t make much of a living from the Blues, he seeks to make a contribution by creating music inspired by this life and this time.
“Storytelling is what music is to me – particularly
the story of how the Blues, born of such brutality,
created a legacy of such enduring beauty.
All of my music honours that legacy by creating
modern Blues for the here and now.”
Award Winner and Award Creator
Son Roberts is an award-winning songwriter being first recognized for “Brakeman” as Best Blues Song of 2013 by the Independent Music Awards. The judges that year included Judy Collins, Tom Waits and Alligator Records founder Bruce Iglauer.
More recently, he was awarded 2nd prize in Paul Reddick’s Cobalt Blues Song Competition for “Down on Vaughan Road” presented at the 2019 Maple Blues Awards.
At that same event, he announced the new Sapphire Award he has created for best Blues Music Video in Canada. sapphireaward.ca
Other titles from Son Roberts include his debut album “You Don’t Know Yet” and his sophomore CD “Tell That Story.”

YOU KNOW WHO YOU ARE
Extraordinarily- talented people created this album. We were all charmed into doing it - for lucre, love, lust or larceny. This music brought us together, tore some of us apart - but that's a whole other stroy. Many thanks to all y'all who are still of the cloth.
CHARMED, I'M SURE
Being my third album of original Blues, it's obvious I live a charmed life. Take those three kids. When I just happened to take their picture in Cabbagetown over forty years ago, I had been here about three weeks - and it was only my third trip here, ever.
THOSE KIDS gave me everything I've ever needed to remember about myself and Toronto. Be confident, playful, and charming... and don't give much of a damn about what people think of you - particularly those who don't know you. Toronto knows me. Why else would it have been so generous to me? This is where I got the chance to become a storyteller.

Bandcamp Daily  your guide to the world of Bandcamp